As a quit coach/technician at Breathe – Freedom from Nicotine, I have been asked a number of times if e-cigs and vaping are safer than tobacco. 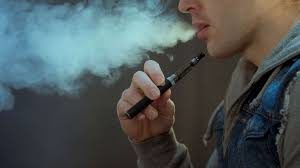 To be honest, the whole concept of vaping is new to us all, and a couple of years ago, the only sincere answer I could give was, “I don’t think so, but I don’t really know much about it.”

The first time I ever even saw a vape pen was about five years ago. A friend showed it to me while extolling the many virtues of the e-cigarette. He claimed it was totally safe, “It’s just water vapor and some flavoring and a little nicotine, it can’t harm you. But best of all,” he continued, “I was able to quit smoking thanks to this miracle.” And with that he took a great big drag on the device and exhaled, what he believed, was just harmless water vapor.

I was impressed at the time. I mean, it really did sound safe; water vapor, how could that harm anyone?

As studies are being done and we begin to uncover the truth about vaping, we are all leaning the fantasy of a safe e-cigarette was just that, a fantasy!

An article in Science Daily, dated October 16, 2019 gives a recap of just one of several recent studies. This one had been done by researchers at The Ohio State University Comprehensive Cancer Center — Arthur G. James Cancer Hospital and Richard J. Solove Research Institute.

Researchers used e-cigarettes with no nicotine and no added flavoring. Instead they used only two ingredients often found in vape cartridges, propylene glycol and vegetable glycerine. Both substances are considered safe and both are approved by the FDA for use in foods and cosmetics.

The study tested 30 people who had never smoked. They were asked to vape for one month. When they returned four weeks later, researchers analyzed their lung tissue. They found the cells in the lungs of the users had levels of inflammation much higher than the control group who did not vape.

Inflammation in the lungs is a considered to be an important force in driving the development of lung cancer and other respiratory diseases. And as was stated earlier, this reaction was accomplished with non-toxic, safe and FDA approved substances!

It’s one thing to eat propylene glycol and vegetable glycerine in some foods, or wear it in makeup, but when heated and inhaled, these substances become a toxic mixture. (And these negative results were achieved without the chemicals in most e-cigarettes/vapes that make them even more harmful, causing maladies including; popcorn lung, genetic

mutations leading to cilia degeneration, gelatins from  vitamin-E which coat the lung interiors, compromising immune systems and on and on.)

And so today, when people ask me if vaping is safer than cigarettes, the answer is simple; NO. Thanks to this study and others being done, we now know, it’s not just harmless water vapor, it’s a toxic mix of chemicals that assaults your lungs and lays the groundwork for future diseases and health issues.