because schools don’t have enough problems already…now they have to deal with JUULing!

An article titled, “JUUL is Biggest Contributor to Vaping Problem in Nation’s Schools” was published in the September issue of “High School Today.”  It was written by Michael Nitti, superintendent of the Ewing Public Schools in Ewing, New Jersey, where he recounts the success he saw with quit smoking programs over the past few decades – only to now see the incredible increase 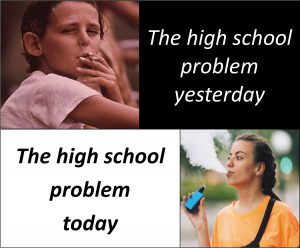 of vaping with high school students.

Nitti recalls the early years of his career, when roughly 40% of 12th graders used tobacco. He was stationed in restrooms during class changes to prevent smoking. Additionally, being a coach, he required athletes to sign a “Code of Conduct” that discouraged tobacco use. He also designed an after-school tobacco education program for students to attend in lieu of detention.

The success of these programs, in conjunction with advertising and public service commercials, saw great success. By 2017, tobacco use among 12th graders had dropped to 7%.

That was about the same time JUUL appeared.

In just three years JUUL rose from non-existence to a become a $38 Billion company. Roughly the same size as Target and Ford. According to a University of Michigan study, from 2017 to 2018 about 30% of 12th graders took up vaping (also called “JUULing” due to the popularity of that particular brand).

Decades of quit smoking work was essentially wiped out!

Schools are returning to the old policies of stationing teachers in restrooms, adding vaping to codes of conduct and creating educational programs.  Nitti also suggests spending tax dollars for other programs designed to curb JUULing.

In the end, his (and all educators) goal is to do whatever is needed to address the problem.

Finally, Nitty suggests those who profited at the expense of our children do their share; noting that $38 Billion would buy a lot of vapor sensors for our schools. *

Unfortunately, sensors don’t actually solve the problem, they only highlight it. So far, there is not much that a teacher or principal can do to get the student to quit, even if they catch the kid vaping.   We have all seen the news stories of teen deaths and severe health problems that are probably attributable to vaping. What we have not seen are the stories about those of us working to deliver a real-world solution that actually work!

You can’t brow-beat a teen into quitting.  Scaring them just makes them crave the drug even more (stress is one of the strongest triggers of cravings). But we have already begun to hear the pleas of students who started vaping to be cool, only to find the addiction is so powerful that they now feel helpless to quit.

Breathe – Freedom from Nicotine is reaching out to school administrators, state health officials and major players in the medical community who want to be part of the solution – to work together to identify the best way to deliver a program right in the schools – to help students actually quit.

Lectures and nicotine gums or patches are not even close to enough – to get kids to quit an addiction that appears to be significantly more powerful than smoking (and research has noted that smoking is more addictive than alcohol, cocaine or heroin).  And most of those old quit methods like nicotine gums and patches, only have a 5%-10% success rate with adults that smoke…imagine how hard it will be to get a teenage boy to quit an addiction that powerful!

The biggest problem is, this is totally uncharted territory.  Nobody has the complete answer.  While Breathe – Freedom from Nicotine has helped many adults quit vaping (the majority of adults that have gone through the Breathe Therapy program to quit vaping, did quit), there is no way to be sure the methods will work as well on teens and twenty-somethings.  While early indications are (based on a limited number of teen participants in the Breathe Therapy program) that the Breathe treatment can help to decrease cravings, there is not enough history to be sure those numbers will stay at a high level.

We also know that we probably need to modify our communication materials, our marketing messages and our cognitive behavioral therapy techniques – in order to more effectively address a teen and early twenties clientele in a way that is understandable, engaging and motivating to that age group.  This will be a work in progress.

A recent survey of Minnesota students indicated that 26.4% of 11th Graders in Minnesota self-reported vaping regularly.  The real number may be closer to double that.  If the Minnesota Department of Health or Education reported that more than a quarter of Minnesota High School students had polio… that would surely be labelled an epidemic and the “powers that be” would be marshaling all available resources to combat this scourge.

Hopefully, our community can do no less in the face of a health threat potentially as impactful.

* For more information go to: https://www.nfhs.org/articles/juul-is-biggest-contributor-to-vaping-problem-in-nation-s-schools/