How much do you smoke by simply breathing?

Depending on where you live, the amount of “smoking” you do varies. 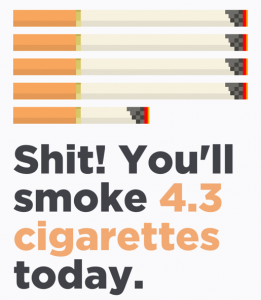 After reading a study that equated air pollution to number of cigarettes smoked, two developers created an app that will tell you how many cigarettes you are inhaling in your city.

The app is called “Shit, I Smoke” and it can be downloaded for free. By using GPS and live pollution data for your area, it will let you know how much you are smoking. For instance, if you live or work on Division street in Manhattan you inhale the equivalent of 2.3 cigarettes per day. On North Main Street in LA, you’re breathing in 4.3 cigarettes per day.

It’s bad enough for non-smokers, but when you think about it, a person living in NYC who smokes a pack a day (a pretty normal amount) is actually smoking an additional 3.45 packs per month! That’s over 4 more cartons of toxic chemicals per year…just by breathing.

And what about us in the Minneapolis/St. Paul area. Well, you and I will have to download the app and find out to be sure. I would think less than New York or LA, but being a major metropolitan area, it is most likely not none!

I guess the moral is, breathing is bad enough on the health of non-smokers/vapers, but if you do use tobacco products…it’s another good reason to quit. I mean, why would you want to take a “bad enough” situation and make it worse!

For more information go to: https://www.citylab.com/environment/2018/04/how-much-are-you-smoking-by-breathing-urban-air/558827/