so you wonder…will we ever run out of smokers/chewers to treat?

From time to time, we at Breathe – Freedom from Nicotine are asked, “Aren’t you afraid someday you will run out of customers?” Ultimately, I suppose that would be a good thing…maybe not for our business, but for everyone’s overall health; that would be a good thing. All of us at Breathe, are former smokers, and we would love to see the day when NOBODY is addicted to nicotine. 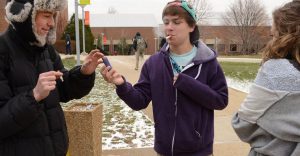 A very long time ago, when I was in high school, we had something called a smoking courtyard. It was a place on the school grounds where anyone was free to light up. If you were smoking in that defined area, there were no consequences. Teachers, or the principal himself could walk by and see students standing out there puffing away and no one cared!

The idea was to stop kids from sneaking a smoke in the restrooms. Thanks to the smoking courtyard, there was no reason for even the toughest of kids to risk suspension by smokin’ in the boy’s room (or girl’s room).

From that perspective, the courtyard was a success. It totally eradicated the issues generated by kids sneaking around to light up. On the other hand, it did absolutely nothing to slow the number of kids who lit up for the first time or the second or the third.

I saw a lot of non-smoking kids, hanging out in the courtyard with their tobacco dependent friends, who eventually said, “What the hell, I may as well give it a try.” And a new smoker was born.

At some point the idea of a smoking courtyard faded away; thankfully! Currently, however, approximately 27% of high school students still use some sort of tobacco product. And every day, about 2000 light up for the first time. *

That is a significant number. When you consider that in a year it’s about 730,000 teenagers trying their luck with cigarettes! Now to be fair, a certain number of them may smoke one or two and never light up again, but the sad truth is, the majority will use that first cigarette to begin a lifelong smoking career.

Additionally, there has been a rise in the use of chewing tobacco. After a slow decline of this form of nicotine delivery, since 2000, the number of users has been growing again. ** I am only speculating when I suggest, the use of chew may be rising because, let’s face it, chew is a lot easier to sneak in public places.

Overall though, even with significant and consistent education programs designed to inform kids (and adults) of the dangers of nicotine. And even with new laws and more stringent enforcement of old laws designed to keep the traditional forms of nicotine delivery out of kid’s hand. And even with the abolition of the infamous smoking courtyards, the sad truth is, dentists will run out of cavities before we run out of smokers/chewers.

I guess the message of this blog is simple: If you know someone who has not started, keep encouraging them to stay on that path. If you know someone who wants to quit, encourage them to do it and do it as soon as possible. Waiting never makes it easier to quit. *** But don’t worry about us…we’ll be here for a long time to come.