In a 2019 TEDx Talk, Mitch Zeller, director of the Center for Tobacco Products at the FDA, takes us on an informative and fascinating walk through some of the history and statistics of smoking. 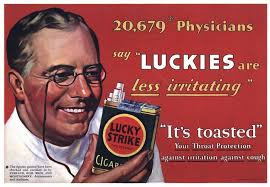 Zeller begins by pointing out that tobacco is responsible for more deaths every year than alcohol, drugs, aids, murder and suicide combined. About 480,000 people die prematurely thanks to diseases traced back to not only smoking, but also second and even third hand smoke.

How did we get to this point?

Going back to the 1930’s, tobacco companies promoted their products as healthy. Zeller shows examples of ads with medical professionals promoting the benefits of smoking. One ad, for example, showed a doctor with a reassuring smile, staring longingly at a pack of a cigarettes, below a caption proclaiming; “20,679 physicians say Lucky’s are less irritating.”

The promotions were so successful that smoking became woven into the fabric of our society. By the 1960’s, over 50% of America’s adults used cigarettes. Zeller even recalls, as do I, being a child in art class, making ash trays for our parents. Something no one thought twice about at the time.

All the while tobacco companies were very aware of the dangerous product they were selling. As early as the 1950’s, memos such as one from Phillip Morris, stated they “are in the business of selling nicotine, an addictive substance. The cigarette is a dispenser of each dose.” At RJ Reynolds, memos spoke of nicotine as the potent drug that tobacco delivers to smokers.

By the 1950’s filters were introduced. Later it was discovered that those early filters contained asbestos. Unsuspecting smokers were not only inhaling toxic chemicals in the smoke, but also, microscopic fibers from the asbestos.

By the 1970’s the next pseudo-advancement was the introduction of the light cigarette. This was a cigarette that had tiny holes cut into the filters to allow air to mix into each puff. Smoking machines proved that the design meant each puff contained significantly less tar and nicotine. The problem was, machines and people do not smoke the same way. When a person smokes, their lips and fingers cover the holes in the filter. This meant that smoking a light cigarette, in practice, gave the smoker the same amount of tar and nicotine as did regular filters.

While the government and health officials recognized the tragic effects of tobacco, it wasn’t until 1998 that the Surgeon General finally, officially declared them a health hazard.

Zeller goes on to discuss how a smoker’s brain develops receptors that need their fix of nicotine. A cigarette is one of the fastest and most efficient methods of delivering that drug. It takes about 10 seconds for the nicotine to reach those receptors with each puff.

As Zeller approaches the end of the talk, he discusses ideas like development of a nontoxic cigarette and the use of other substitutes for smoking such as nicotine gums and patches. *

Ultimately, his objective is to bring the adult tobacco-using population down to near 0%. He believes this goal could be reached by mid-century.

*We at Breathe-Freedom from Nicotine, do not encourage the use of any type of substitute for smoking. However, we do agree with Mr. Zeller that his objective of attaining an adult population with 0% nicotine users is an excellent goal to work toward.

To see the full Tedx Talk go to: https://www.ted.com/talks/mitch_zeller_the_past_present_and_future_of_nicotine_addiction?utm_campaign=social&utm_term=global-social+issues&utm_source=facebook.com&utm_content=talk&utm_medium=referral#t-1034459