The Cost of Smoking

It’s pretty common for people to smoke about a pack of cigarettes every day. 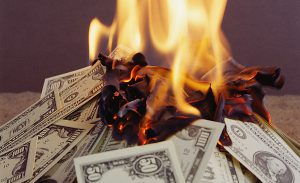 When I smoked, it was Marlboro’s! If I were still smoking a pack a day today, that would easily come to over $60 per week or roughly $3,120 per year.

I say roughly because knowing the actual cost is almost impossible. I was a lot younger then and there were many nights when I’d sit down with my friends, pop open a beer and fresh pack only to find myself running to the store two hours later having just extinguished cigarette #20.

So, the truth is, if we could figure out a way to count those nights, and there were a lot of them, it would probably come to much more than $3,120 per year.

Of course, at that time I never really paid attention to what tobacco would do to my insurance costs. It just was not something I cared about. Today though, we can’t avoid the ever-increasing monthly tribute to the health care provider gods.

Depending on what state you live, smoking will add between 15% and 50% to your health insurance. The ACA allows insurance companies to charge up to 50% more to insure tobacco users (I’m including chewers here too) than the same coverage for non-tobacco users. I live in Minnesota where a person who smokes will pay…wait for it…the full 50% more allotted by the ACA. *

So, to put it another way, if you are a non-smoker who pays $500 per month for your insurance, your neighbor who lights up 20 times a day will be charged $750 for that same policy. We can just go ahead and tack another $3,000 to that $3,120 addiction fee you’re already paying.

Of course, the insurance numbers will vary a lot depending on your policy, but for the sake of this blog and to make the point, were going to just go with these figures.

There are also a lot of other costs none of us generally think about. For instance, if you smoke, your car devalues about $200 more per year than the same car owned by a non-smoker. ** That’s due not only to the smell inflicted on your vehicle, it’s also because, no matter how careful you are, sooner or later, the lit part of the cigarette will fall between your legs.

And don’t forget that new coat with the hole in the lapel or the additional cleaning costs to get the smell out of your suit. House values go down and…well…you get the idea; smoking is very expensive. Tobacco is probably even more expensive than you ever realized!

And all that cost can be traced back to that pack of cigarettes every day.

The good news is you can quit. And you should quit, if for no other reason; so you can finally afford to drive a car without burn marks while wearing a coat without holes and a suit that doesn’t smell as you cruise to your annual doctor visit paid for by cheaper insurance, before you head out for a night on the town with an extra $6,120 in your pocket!

And doesn’t that sound like a lot more fun than lighting up another cigarette?