A recent study by scientists at the UC San Diego School of Medicine, found that infants who are expose 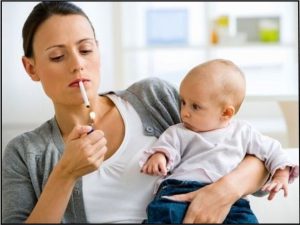 d to nicotine within the first few weeks of life, by way of breast feeding, developed changes in neurons that are not found in children of mothers who do not use nicotine.

These modified neurons show a greater receptivity to nicotine and a greater likelihood of addictive behavior later in life. There are previous studies that have shown maternal smoking early in the child’s life make the children more susceptible to addictions as they mature. This is the first study that understood the process that takes place within the brain.

Researchers found the young neurons exposed to nicotine create a “memory” of the drug. It increases the number of nicotine receptors within the brain and a protein that is normally only found in cells that create dopamine.

Once the exposed child reaches adulthood the reward center of the brain produces higher levels of dopamine, generating an increased nicotine desire.

Understanding the changes that take place within the neurological cells will help researchers develop new ways to interfere with the brains desire for addictive substances.

The doctors are researching the effects of other addictive substances as well.